The St. Francis Hotel, one of the city's architectural landmarks, was a sensation when it was built in 1904.

Originally, the building had only two wings (the two to the south, on your left as you face the hotel from Union Square). After the 1906 fire, the building was gutted and restored and the third wing - just the leftmost three bays - added. The final addition of four more bays (the right half of the right wing) came in 1913.

The building's composition is a three-part vertical block. The sandstone walls clad a steel frame.

In 1941, a cocktail lounge designed by Timothy Pflueger opened in the St. Francis; regrettably, his design was lost to a subsequent remodel. 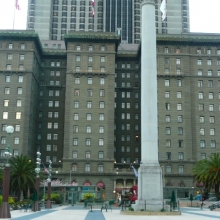 More by Bliss and Faville