In July 2007, San Francisco changed its designation from Unrated to Contributory.

Shortly after the 1906 earthquake and fire, a new storefront was built at 225 Front. (The address for this lot had previously been 209-211 Front; the street was renumbered after the quake.)

By 1908, the building was occupied by a tailor, Vinsenzo Barsotti.

The building was renovated in 1929. The owner, J. H. Hjul, submitted his own plans for altering the first floor and adding a second story. The estimated cost was $3,600.

In 1941, the building held several wholesalers:

By 1971, McCarthy and Son had been joined by Sir Speedy, a commercial printing company.

Speedway Copy Systems has occupied the building since 1980 (perhaps earlier). 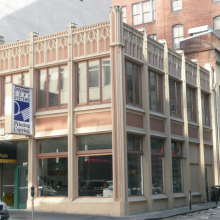