The distinctive X braces supporting this tall black skyscraper were a first - a new approach that Skidmore, Owings & Merrill reprised a few years later on the Hancock Tower in Chicago.

SOM brought the steel structure to the outside of the building. Passersby focus on the building's skeleton, with a glass curtain wall behind.

The architects used anodized aluminum to clad the supporting steel structure, showcasing the aluminum products of the building's owner, Alcoa.

The parking garages were built partly above ground (since the water table is relatively shallow right next to the bay).

The horizontal beams along the outer Xs were added in 2003, disrupting the original design. 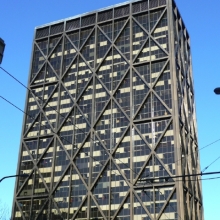 More by Skidmore, Owings and Merrill