The Bank of America building features jagged edges (made up of thousands of bay windows) and stepped setbacks in the upper stories intended to invoke the High Sierra.

Two prominent architectural firms - Wurster, Benardi and Emmons and Skidmore, Owings and Merrill - were joined by consulting architect Pietro Belluschi in the creation of this landmark design.

When it was completed in 1969, it was the tallest building west of the Mississippi River - a distinction lost in 1972 to the Transamerica Building.

The top floor houses the Carnelian Room, a posh restaurant and bar offering stunning views of the city below. The restaurant's name reflects the carnelian granite used to clad the building and its adjoining A. P. Giannini Plaza. 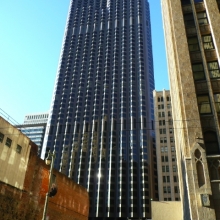 More by Skidmore, Owings and Merrill

An Architectural Guidebook to San Francisco and the Bay Area