Designed concurrently with the Clay Street Center, the Residence Hall is a severe, elongated Tuscan villa. Morgan was the official YWCA architect for the western region for some years.

A women's hotel called the Residence (1929-30) on Nob Hill in San Francisco was Morgan's last major building for the YWCA. Its formal exterior of brick with tile decoration is well suited to the Powell Street site; the building turns the corner to adjoin the Chinese YWCA, also designed by Morgan. Tall arched windows along the front illuminate formal public rooms, a paneled library with a fireplace imported from France, and a large assembly room. Originally located along the axis to the large formal living room (40 by 60 feet) were a central dining room and kitchen on one side and smaller dining and sitting rooms on the other. The living room's tall windows look out on Chinatown, and its long interior wall, which Morgan had decorated with a silk wall covering, now has a Chinese mural.

Morgan wanted this building to signify the importance of working women, and she sought to provide them with amenities that at times seemed excessive to the YWCA board. Her determination to provide private dining rooms and kitchenettes for the young women, so they could occasionally entertain friends for meals, met with opposition. "But these are minimum-wage girls," was the protest, "why spoil them?" To which the architect replied: "That's just the reason."

This building is a San Francisco Historical Landmark. 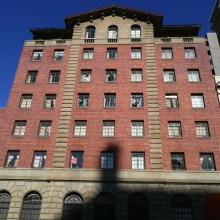