The Bohemian Club is an ivy-covered brick building with a touch of the Moderne, built for an exclusive private club.

The building contains lounges, dining rooms, and meeting spaces, along with residential quarters on the top floor.

The club was formed in 1872 by journalists who wanted to promote arts and culture in San Francisco. While the club now admits businessmen, politicians, and other prominent citizens, the by-laws still require a certain percentage of the membership to be creative artists. Works by member artists adorn the walls inside.

The club mascot is an owl; you can spot owl images over the door, above an upper-story window, and on a plaque near the corner, with the motto "Weaving spiders come not here."

The terra cotta panels above the second-floor windows depict the arts: Art and Architecture, Playwriting and Acting, Literature, and Music.

The brickwork on the top floor creates fluted pilasters and zigzag patterns below the cornice.

The terra cotta ornamentation was created by Carlo Taliabua and Haig Pattigan. Jo Mora did the bronze bas-relief honoring Bret Harte. All three were members of the Bohemian Club (and Bret Harte was an Honorary Member). 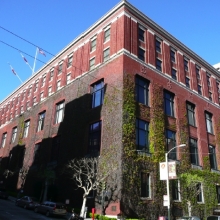