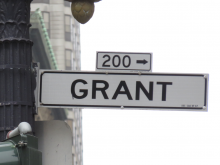 Grant Avenue runs north and south through the eastern part of San Francisco, from Market and O'Farrell to the waterfront at Pier 39, with a gap between Francisco and North Point, passing through the Financial District, Chinatown, and North Beach.

According to Streets of San Francisco, Grant was previously named DuPont Street (after Captain Samuel F. DuPont), and was originally known as Calle de la Fundación. In 1876, the stretch of DuPont between Bush and Market was renamed Grant Avenue in honor of General Ulysses S. Grant, and the new name was extended along the whole street in 1908.