The Delaware Building is an Italianate office building. It was built just after the Chicago Fire, when much of the city had to be rebuilt; it's a rare survivor from that era.

It was originally known as the Bryant Block.

The building was renovated in 1888 by Julius H. Huber. He added redesigned the first 2 floors, added the top 2 floors, and added an atrium.

The building reflects the Victorian sensibility of the time: the bays are different widths, and the building uses a wide variety of materials, from the cast iron and glass on the bottom 2 stories to the pressed metal on the 2 top floors.

The building was one of the first in Chicago to use a precast concrete facade.

When the building was remodeled in 1888, it became known as the Real Estate Board Building.

Currently, the building is the headquarters for Guaranty National Trust, a title insurance company. It also has a McDonald's on the first floor. 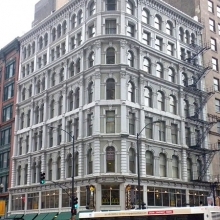