This French country-style house has a simple, symmetrical facade topped with a cornice of dentils and a pyramid-shaped roof.

On July 31, 1909, the San Francisco Call reported, "Another recent sale in the Presidio terrace was made by Baldwin & Howell to Attorney Frank V. Keesling, who purchased lot 20, the size of which is about 50 by 130 feet, for $7,500. A residence costing about $12,000 will be constructed by Keesling at once on this property."

The home was built for Major Francis Keesling and his wife. Keesling was a prominent attorney; as a member of the National Guard, he helped rescue earthquake victims in 1906. Later in life, he was chairman of the Golden Gate Bridge construction committee.

From 1970 to 1978, the home belonged to Judge Thomas Dandurand and his wife; Governor Reagan appointed Dandurand to the Superior Court in 1974. 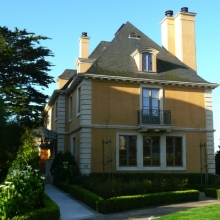